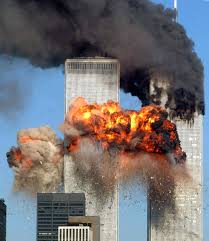 On 9/11/2001, Moslem invaders executed a diabolical, three-pronged aerial attack on New York and Washington DC, in which they murdered 2,996 people on American soil, injured over 6,000, and caused billions of dollars of property damage.  Thousands still suffer from smoke and dust inhalation to this day.   Fifteen years on, many of us still have nightmares about that horrific day, and still mourn those that were murdered.

But fifteen years on,  the Federal government,  mass media, and moneyed global elites have united to help murderous Muslims and other foreign invaders/infiltrators finish the job they started on 9/11/01.

In 15 years, our Federal government has gone from utter incompetence in protecting us against foreign Moslem murderers, to actively inviting them in, paying their way, and throwing open the borders to let any in any invader who wishes to harm Americans.   Illegal immigrants pouring across the border are not deported; they are merely released back into America.

After fifteen years, "Homeland Security," fed hundreds of billions of fiat and tax dollars, and charged with protecting Americans from foreign infiltrators, has turned its awful Sauron-like gaze inward.  They have declared that American gun owners and "climate change deniers" to be the enemies of the state   This is in line with the 2012 mandate of foreign infiltrator / Presidential adviser Valerie Jarrett, who famously snarled, "After we win this election, it’s our turn.  Payback time.  Everyone not with us is against us and they better be ready because we don’t forget. The ones who helped us will be rewarded, the ones who opposed us will get what they deserve. There is going to be hell to pay."

Fifteen years after 9/11, under the appropriately-named Loretta Lynch and her subordinate, the execrable Jeh Johnson,  "Homeland Security" seeks to punish those Americans with whom these sub-tyrants disagree.     Despite strongly-worded letters from Congress (heh!) warning Lynch against it, she and Johnson would turn "Homeland Security" into Orwellian political enforcement, like German commissars and Soviet zampolits.   Instead of protecting Americans from foreign invaders, Lynch is importing tyranny through 'legal' channels, seeking to put globalists from the UN in charge of policing American cities ("Strong Cities," indeed) and even our elections.

Fifteen years on, instead of protecting the "Homeland," government functionaries fly in young Moslem men from countries like Syria and Chechnya, more than 300 per week, infiltrate them into American cities and towns, and sustain them on the teat of welfare while they plot more harm against Americans.   The Boston Marathon Bombing (leading to this tyranny against Americans), the San Bernadino murders, and the ISIS Massacre at the Orlando Pulse nightclub: ALL perpetrated by Moslem infiltrators that "Homeland Security" signed off on.    And of course, all these murders occurred in "gun-free zones," in which everyone except the violent perpetrators are disarmed.  With citizens disarmed and police standing back for three hours as in the Orlando massacre, Muslim murderers can rack up a body count like points in some macabre video game.

Fifteen years on, massacres by Muslims are just "workplace violence."

Fifteen years after 9/11, instead of encouraging everyday Americans to be armed to protect their families and communities against foreign infiltrators, the President and his sub-tyrants in "Homeland Security" and the Department of State target gun makers and ammo manufacturers, gunsmiths, and gun owners with "executive actions" and "Presidential decision directives" that seek to make the price of self-defense even higher than it is.   These tyrants have more vitriol for NFA item owners and hobbyist gunbuilders than actual criminals and foreign infiltrators, whose violations of gun laws "Homeland Security" declines to prosecute.  And what's more, they intentionally armed the Mexican drug cartels and other enemies of America, seeking to blame American gun owners for these invaders' villainy.

Fifteen years after, the FBI, a fully-compromised organization whose initials apparently now stand for "Faking Bogus Investigations," seems to have become a wholly-owned subsidiary of the Democrat Party.  The dishonorable head of the FBI James Comey stood before the nation and declared that the Democrat nominee had done nothing wrong in exposing classified intelligence on a server that any "script kiddie" hacker could access.  How much did our foreign adversaries of the Moslem and Communist varieties benefit from intelligence, leaked by the capricious but incompetent lesser Clinton?  We will never know, because undoubtedly, "Homeland Security" will soon seal what files aren't sealed already, and by some accounts, Clinton herself may soon pass away due to her maladies, thus escaping any penalty in this life.  How will she fare in the next?

Fifteen years after 9/11/01, the Federal government is just as hell-bent on the destruction of the United States as the 19 Muslim hijackers ever were, maybe more.  The Feds are just going about it without flying airplanes into buildings in New York.

Fifteen years on, America is being invaded, and the Federal government is not only complicit, they are leading the invasion.

The next 15 years?  There may not be fifty United States fifteen years from now if Hillary Clinton is elected.  I only hope Trump is elected and keeps his promises to secure the border and protect us from foreign Moslem invaders, and to protect the right of the people to keep and bear arms, which is the right to protect ourselves.  However, Congress and the Courts will do everything in their power to prevent him from protecting this country against invaders, because, well, that would be racist and insensitive to Muslims.
at 3:58 PM