Mozilla and the United States of Lawlessness

Look, I don't believe people should be forced by the power of government, the power to tax and destroy, to recognize so-called 'gay' marriage.  But EVEN IF former Mozilla CEO Brendan Eich had been fired for supporting unnatural marriage (instead of being against it), I would have been screaming the same thing I am right now:

The United States has laws, which descend from the 1st Amendment, that protect the rights of free speech and free exercise of religion.    You can't fire people for what they believe, or what causes they support financially (i.e., political speech).

How a public company like Mozilla can transgress so blatantly 42 CFR Section 2000e (EEOC) is enigmatic of the state of utter lawlessness of this country.  The protected classes (gays, Democrats, blacks, Hispanics, foreigners of all stripes, gun grabbers) don't have laws enforced on them, while the undesirable classes (whites, straights, Christians, Jews, gun owners) have no Constitutional protections from wanton transgression of the same laws by either business or government.  And what's the difference these days, anyway?

Not only will Mozilla get away with this, but they probably have half the US government cheering them.

What's next, Mozilla?  How about it, Left-coast tech firms?  Y'all gonna kowtow to the Gay Mafia, too? You gonna fire engineers and coders because they go to synagogue on Saturday, or church on Sunday?  I mention Christians and Jews, because clearly Muslim coders and engineers are exempt, as the politically-correct establishment considers them a protected class.

Or perhaps these companies will go through the political donation records, and fire employees if they have given money to Libertarian or Republican candidates?  What about getting rid of employees who have NRA stickers on their cars?   Now that the 1st Amendment essentially is no longer in force, they can do whatever they want.

And they will.  The political Left is this country will do ANYTHING: cheat, lie, steal, kill, deprive Constitutional rights under color of law, spend $TRILLIONS we don't have on Free Stuff to buy votes, ANYTHING to enslave people and keep them enslaved.  They themselves are slaves to sin, and misery loves company.

Here's a salient quote from my fellow gun blogger and Appleseed acquaintance Sean Sorrentino, who happens to be on the other side of this issue, but still holds to Constitutional protection of free speech, as I do:


The victim here is not the target. In the formulation attributed to Sun Tzu, he is just the one who was killed to frighten the one thousand. He was taken down so the thousands of others will close their checkbooks and shut their mouths so that the Left doesn't wreck their lives. 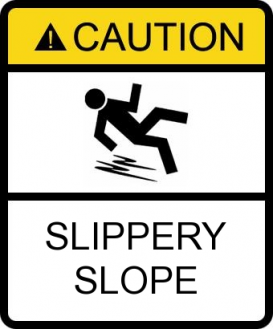 Exactly right: this will chill political speech right across the spectrum. And who benefits?  The Left, which is already in power. This is nation-destroying stuff, people.  This slope is steep and slippery, the bottom is pretty dang hot, and our handbasket is picking up speed fast.

This is a very, very bad thing indeed that has happened in America, but I can't say I'm too surprised, because the path that led us here is all too clear.
at 10:31 PM