A Perfect Day: My America @ The Gun Range

We awaited zero  hour.  All was prepared; it was go time.  Furtively, we glanced at the clock.

And we were off!

Two of my co-workers, T. and S., and I went to the outdoor shooting range today, taking off as close to the exact tick of the end of our shift as my WWV-synchronized watch could determine.

Our three pickup trucks raced along the interstate, exited, then caravanned over a few miles of dirt roads to our local public outdoor range.

The  spring weather in Alabama was shirtsleeve-warm with a stunningly beautiful sky as we pulled up to the rangehead, donned ear protection, and dismounted.  We began to unload Glocks,  Kel-Tecs,  SIGs,  Berettas,  Springfields, and AR's of various manufacture, lots of ammo, and home-made target stands, one with a swinging gong made of AR-500 armor plate.   We were in luck:  there was one lane available, and it looked like another couple was about to pack up.  They did; we eventually expanded to the three right lanes under the covered shooting position.

S. is the youngest of our trio, in his mid 20's.  As affable, gregarious, and jovial as S. is, you'd never know unless you were told that he is a brilliant engineer with a master's degree from a well-known university.  He also got his concealed-carry permit as soon as he turned 21.  (I think his wife is next.) S. stood in the rightmost shooting lane, in perfect Weaver stance, punching precise groups of holes with his 9mm Springfield XD-M in a "Dirty Bird" splatter target 18 feet away, which was stapled to a wood and PVC target stand I built.

I wish I had been as switched-on to self-defense when I was his age.

I took my turn next, working on getting used to the sights on my Glock 22c.  I also switched out the stock Glock barrel for my Lone Wolf 9mm barrel, and shot some of T.'s 9mm handloads; cheaper than 40 S&W for practice.  I called "threat", pulled the pistol from my holster, and efficiently transitioned to the two-handed Weaver stance.  I punched a triad of 9mm holes in the bullseye masquerading as a bad guy, then stopped, went to low ready, and moved my gaze left and right, coaching myself to "search and assess."  I also practiced a magazine reload when the Glock ran dry, and smoothly returning to aim.

What you practice is what you will do when a life-threatening event happens.  I hope.

Next lane over, T. had his Chrony set up, and the bench top was lined with precisely calibrated 9mm loads from his Hornady progressive press.  T. was trying to find the best load for the tightest group in his Beretta 92, that also has the virtue of using an inexpensive powder.   T. is as careful and analytic in preparing his handloads as he is in his engineering work, crafting some of the finest firmware for data communications to be found in our industry.

Engineers live by accuracy and precision, so it is natural for many of us to be gun enthusiasts.

T. got the data he needed, his eyes dancing as he reviewed the data with a crooked grin, glancing over at me as the average and standard deviation of the velocity appeared on the Chrony's high-contrast LCD, as I looked on and nodded approvingly.  While the Chrony was up, I broke out my custom AR-15 with the New Frontiers lower, and measured the muzzle velocity of some factory .223 loads, as a baseline against some load development I'd been doing myself.  The Chrony's LCD blinked 3106 feet per second of 55-grain goodness.

We shot each other's pistols this bluebird spring afternoon, this having been the first time S. had shot a Glock, and my first time to shoot a Beretta 92, T's bedside backup.  After I shot S.'s compact XD-S in 9, I quipped, "I think I'm in love!" triggering a barrage of laughter from the two engineers behind me, abruptly attenuated as my electronic hearing protectors blocked a report from a bolt-action rifle down the firing line.

This day, we had a good bunch of strangers who were shooting alongside us.  No scary safety violations, no muzzle sweeps, no idiots pointing guns toward the cars instead of downrange.  Solid, safety-conscious, proficient, 2nd-Amendment-supporting folks of all ages, races, and walks of life.  D., an Army Airborne Ranger who'd just got out, had a ball shooting my gong target with his FN Five-Seven, 100 yards away.  Several others had to try it with their pistols. D hit it with all four of his, including his .45.

John Moses Browning and Elmer Keith would have been proud, I think.

Further down the line, a middle-aged man and his younger gal, who had apparently spent more at the plastic surgeon's than on that beautiful stack of bolt-actions, were touching off some Tannerite targets up on the 100-yard berm with some rather hot handloads in a Winchester Model 70 bolt-action in .270 caliber.   The woman, snuggled into the man's lap on the bench seat, peering into the scope, sought to get a perfect cheek weld, as he patiently instructed her.  She giggled uncontrollably every time a vast gout of steam burst forth from the Tannerite detonated by the 130-grain bullet traveling at over 3,000 feet per second.

Her delight was contagious, up and down the firing line.

As the sun crept low in the Alabama sky, the crowds waned, and my two co-workers went home.  I stayed on to work a bug out of my AR: a sticky buffer retainer spring.  Later, C., a young father who was zeroing the sights on a Ruger American bolt-action in 22LR for his 5-year-old son, took turns with me plinking my gong target up on the 100-yard berm with zippy CCI Mini-Mags.  Every kid should have a .22LR bolt-action rifle, boy or girl.   C. and I agreed that we are going to go squirrel-hunting together this fall.

The cacophony of reports slowed to occasional pops, then silence as we "went cold" for awhile.  I talked a long time with D. the Ranger and C. the bolt-action dad.  D.'s neighbor, who was new to shooting, was getting instruction on the 12-gauge home-defense shotguns he'd just bought.   As we conversed, the old man who works at the range swept up brass, and commented on a point D. was making about gun ownership.

Oh, by the way for the anti's who think gun owners are all "old white guys": both D and his neighbor are members of minority groups.  But that does not matter here on the firing range; here, the right to keep and bear arms, the birthright of every American, is exercised by all, and proficiency in arms for self-defense is honed here to a razor edge.

As if to make a point about the latter, a young man and his gal rode up near the end of the day on matching Kawasaki motorcycles.  They dismounted and came to the firing line, the man unholstering a Smith & Wesson M&P, and beginning to work with the woman on the fine points of the pistol.

This is a perfect day in my corner of America.  This is the way things ought to be, from sea to shining sea.

Update: an account of another perfect day at the range.  Maybe the kids are all right, after all: 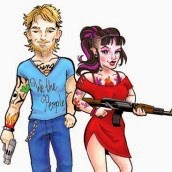 They discovered new heroes, the real revolutionaries — our founding fathers — and fell deeply in love with some neglected, derided old documents: the Declaration of Independence; the Constitution; the Bill of Rights. And they saw how far we’ve drifted from them.

“They told us capitalism was wrong because lots of power could be held by a relatively small group,” Purple-Stripe explained. “But it’s clear they want to replace it with a system where another even smaller group has absolute power, with the brute force of the state to enforce it. Not happening; I’ll die first. That’s why it’s important for them to disarm us. And that’s why we have these guns. The founding fathers warned us.”

She shook her curls. “Strange, isn’t it, I had to leave college to get an education?”

Ol' Backwoods real education began about then, yep.
at 10:42 PM