Running Out Of Amendments to Violate, I Guess?

The 1st, 4th, 5th, 6th, 7th, 8th, and certainly, the 9th and 10th Amendments of the
Constitituion, part of our Bill of Rights, have been trampled on by governments Federal, state, and city in this former Constitutional republic.

I guess it was a matter of time before they got to the 3rd.

What's that, you ask?  This is what your public school teacher didn't tell you about:

No Soldier shall, in time of peace be quartered in any house, without the consent of the Owner, nor in time of war, but in a manner to be prescribed by law.

Behold the violation of the 3rd Amendment of the Constitution by the jack-booted, Federal-trained standing army known as the police:


JACKSONVILLE, FL — A woman says a SWAT team kicked her out of her home and then helped themselves inside to gain a "tactical advantage" over a neighbor who was under investigation.

Deborah Franz was told to leave her home on Sunday, February 2nd, when there was a domestic disturbance in the mobile home across the street.  A neighbor had allegedly gotten physical with his father and displayed a handgun.  The reaction was a paramilitary force cordoning off the block and forcibly evacuating neighboring homes for the rest of the day.

"The cop goes 'You all need to leave, you can’t be in your house,'" Franz told WTEV.

Franz left for 6 hours while police blockaded the street.  Little did she know that controlling the scene meant taking over homes not involved with the investigation.

When she returned, she says she “froze” when she opened her door and her belongings had been obviously tampered with.  Her television had been moved and her Xbox game console disconnected.  Window drapes had been pulled to the floor.

Franz believed she had been victim to a home invasion.  Then it dawned on her that the home invaders were working for the Jacksonville Sheriff’s Office.

The SWAT team had broken into her home to obtain a tactical advantage against the suspect next door.  Franz wasn't even so much as notified of the entry.

The Founders warned us about keeping up standing armies in peacetime.

"Backwoods!," you say.  "You are just a gun-toting, paranoid, right-wing nut job!  These were police, not Federal soldiers!"

You'll have to forgive me.  I have trouble telling the difference these days.  Local police are trained by the Feds, given Federal armored vehicles, tanks, rifles, shotguns, and other weapons and ammo. Then, they tromp about like thugs, murdering old men and young motherly dental hygenists, and locking down down entire towns.
.

"But you don't know that the 3rd Amendment applies to POLICE!," you may screech.  Yeah, none of us knows for sure, in this age of the plastic Constitution, for the Supreme Court has not directly ruled on the 3rd Amendment.  It has not even been "incorporated" against the states, as other parts of the Bill of Rights have, although this is mainly due to a lack of cases coming before the Supremes. 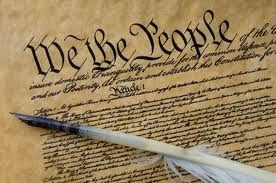 But we have something.  In the case of Griswold v. Connecticut (1965), the Supreme Court did cite the Third Amendment as one part of the Bill of Rights that evidences “zones of privacy” and a cites a constitutional right to privacy (that, sadly, later was used to justify abortion, but I digress).

"Zones of privacy."  This means that in a Constitution republic, the supposed 'needs' of the jack-booted thugs calling themselves police DO NOT trump the rights of homeowners to determine whether or not their home will be used as a base for assault on their neighbor.

Your home is yours, or it used to be.  It is your property, and it is your private place, to do what you will there, long as you harm no one.  And the government has to justify by DUE PROCESS any takings.  Even the Kelo v. City of New London case, regarding eminent domain takings, did not go so far as to deny that right.

Look, Ol' Backwoods ain't a lawyer.  But does any American, left or right or whatever, want their government-- their police-- acting this way?

I guess that depends if the putative American is part of the power elite or not.

But I am sick of this nonsense, and one day, it is going to get some police killed.  Oh, wait, it already did.
at 9:36 PM