If a Government Shutdown Falls In the Forest, And No American Is There to Hear it...

I really wanted to go shooting this morning, at the very nice Uchee Shooting Range at the Tuskeegee National Forest near Auburn, Alabama.  I have some new .223 loads I am just dying to try out.

But no.  King Barry has decreed that there will be no recreating, and has erected his Barrycades, along with His Royal Decree.  The gate was closed and locked, too. 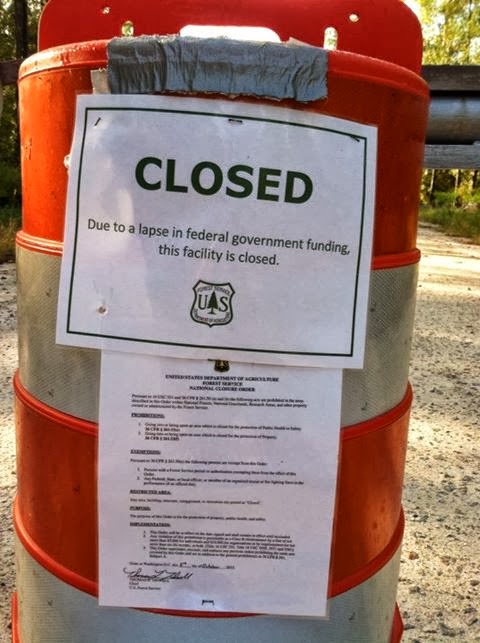 The roads in the Tuskeegee National Forest were open, as reported in the MSM, so I assumed the shooting range would be.  I stopped by the Torch85 Truck Stop, as was my custom, to pay my $3 Federal User Fee and get a government-stamped piece of paper, that has never before been checked by a ranger in all the uncounted times I have been shooting there.

The clerk at the store told me that the Forest Rangers told them not to sell any user fee slips, because the shooting range was closed because of the government shutdown.  But he also said, with a wink, the people who check the slips aren't going to be there today.

I decided to go in anyway, and got the picture you see above.

I saw people riding horses and jogging in the King's Forest Tuskeegee National Forest, right next to the shooting range.  Apparently, those forms of recreation are acceptable, but shooting eeeeevil assault rifle-shotgun-pistols is not.

And again, I have never seen a ranger at the shooting range in all the times I have gone, so it's apparent that we can manage ourselves at the range.

Your government at work, restricting the commons.

I and millions of other Americas are getting really, really sick of this crap, and we are not blaming the Republicans.  In 1995, Bill Clinton's executive branch experienced a shutdown, and I wasn't barricaded from going shooting or hunting in National Forests then.

No, this is ALL Obama.  And his minions.  And most likely, Valerie Jarret.

The question is, do I crash the Barrycades and go shooting anyway?  Would an arrest and conviction for crashing Barrycades in a National Forest really hold up?

Given the experiences of David Olofson, and what the ATF did to him, I have to admit to having 2nd thoughts.

I'm not a 90-year-old WWII vet with nothing to lose.

(Title is a hat tip to the inimitable Mark Steyn.)