Trust me on this, my friends: the powers that be WILL use this to get the gun ban/gun registration
through Congress.  There WILL be several guns pulled out of the Saudi guy's apartment, which of course the media will start calling an "arsenal."  These will be cited as proof that we have to get rid of all guns, since Saudi terrorists might come here and use them in a gun-free zone like Boston.

I am completely serious.  You know I'm right.


Dear Lord.  That guy on Fox News just equated the bomber to gun owners and Constitutionalists!

'GUNPOWDER BOMB' will be used to control trade in reloading components-- you watch.


Joe takes a look at the explosion and concludes it may have been a deflagration rather than an explosion. He has more direct experience with this explosives than any other gun bloggers I know, so I’d trust his analysis. Reports coming out in the media about it being a gunpowder bomb fit with what Joe has said. I don’t want to even think about the new restrictions on civil liberties the powers that be will dream up in response to this one.

BLAME:    Yep.  CBS blaming it on Constitutionalists.   Told ya they would blame it on us.


@NickKristof: explosion is a reminder that ATF needs a director. Shame on Senate Republicans for blocking apptment

As if some bureaucrat in Washington is going to go around with bomb-sniffing dogs in every big-city bomb-free zone?  Yeah, right! 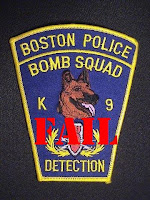 MEDIA BLAMES TEA PARTY via Resistor in the Rockies:

Boston Marathon Explosions Already Being Blamed on the Right