The Bank Is Closed. What Do You Do?


Cyprus: The Banks Won't Open Before Tuesday At The Earliest

What would y'all do if the United States declared a bank holiday for over a week?

Would you have food enough at home to live?  Do you have stored fuel to run your vehicle?  A stash of cash at the very least?

Americans should start thinking about these things, because Cyprus is not the only nation whose banks are in trouble.  The theft of savings by banks and government is coming to America.  And bank closings are already here.

UPDATE: Federal Reserve Chairman Bernanke is wrong, or just trying to cover up the sad state of the US banking system.  Peter Schiff says:


The banks are in the worst shape they've ever been. They are a just a few interest rate hikes from insolvency.' Losses to depositors due to money printing to bailout and due to inflation would be far greater than what the Cyprus depositors might be losing due to the tax. Banks are reckless, depositors don's care.


UPDATE 2: Riots have begun in Cyprus over the banking thefts and closures.  Does that make them Cyp-riots? 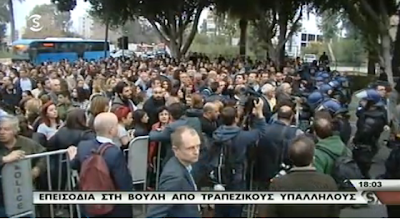