Murder, Useful to the Left (UPDATED)

Update: Told ya they were ghouls, and would exploit Chris Kyle's murder. 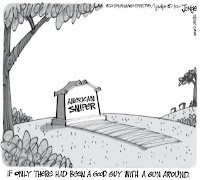 Murderer was caught by good guys with guns, lefty.

Well, ain't this convenient.  Right after the NRA formulates its cogent "the only thing that can stop a bad guy with a gun is a good guy with a gun" argument, a murder of an armed good guy in a place of arms happens, providing the Left a handy counter-example, though not necessarily an argument.

The context of the NRA's argument, of course, was a good guy protecting the innocent, not necessarily protecting himself from an insane murderer he already knew and, perhaps foolishly in hindsight, trusted not to betray him.  Of course, such subtlety escapes the morally-retarded Left.


On Sunday, Mother Jones co-editor Clara Jeffery used the murder of former Navy SEAL Chris Kyle to push for gun control in a series of tweets that sparked controversy and anger, Twitchy reported.

"So if a Navy SEAL and reputed best sniper in the world AT A GUN RANGE can't take down a sick guy on a rampage," she added a short time later.

I agree with Twitchy's take: ghoulish.  And morally retarded.

These people will do ANYTHING to advance their agenda.

Update: I ain't the only one.  The mighty Kurt Hofmann chimes in.