UPDATE!  Both these cities have ATF Violent Crime Impact Teams operating in them.  And massive ATF screw-ups in the program.   Coincidence?

Ol' Backwoods reckons there's kind of a poetic parallel between today's Cold Civil War and the American Revolution.  In both cases, the oppressors of the people were parading about, trying to scare the lily-livered population into submission to their tyrannical power.

Poetic, that is, if it weren't so dad-blamed threatening to the Republic.

Check out what's happening in Houston and Miami.


With military helicopters flying above her southeast Houston neighborhood, Frances Jerrals didn't know what to think.
"When you see this, you think the worst. When you hear this, you think the worst," Jerrals said.
And so, she passed along her concern.
"She told me 'don't come home it sounds like we're in a war zone. Guns, shooting, helicopters flying around the house,'" Isaac Robertson Jr. said.
The U.S. Army along with other agencies took over the old Carnegie Vanguard High School near Scott and Airport. There were armed men in fatigues, plenty of weapons and what many thought were real live rounds.
"I felt like I was in a warzone." Jerrals said. "It was nonstop. I was terrified."
Turns out, it was a multi-agency training drill that Jerrals wished would have come with warning.
"They could have done a better job in notifying the neighborhood," Jerrals said.

This WAS the notification.  This is a warning shot across the bow.  Notifying the sheeple: "We are in control, and you will submit to us".

And it's working for some folks.  The article continues:

The Army did not give any details of what the training is for. Some people we spoke to needed no explanation.
"If it's to protect our kids, I'm all for it," neighbor Glenn DeWitt said.


A training mission, apparently with live ammo, in clear violation of the principle of Posse Comitatus, with standing armies terrorizing the very people whose consent the government supposedly depends on.

And Dimwitt DeWitt is "all for it."

There are tens of millions of Quislings just like him.

An in Miami, we are treated to Feds rappelling out of helicopters onto buildings: 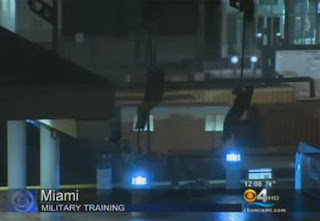 What are they preparing for?  It's obvious, really: massive civil violence and insurrection requiring deadly force to put down.  Essentially, a hot civil war.

Prepare, people; the time is not long now.