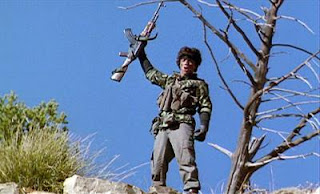 Ol' Backwoods will never forget when I was a kid in the mid 80's, watching the scene in Red Dawn where the Commie major tells his minions to go to the gun store and get all the Forms 4473.  Those are the yellow forms, kept in every gun store for up to 20 years, with a record of who bought what.

Look, Ol' Backwoods agrees with many in our 2nd Amendment community that eventually, there will be a confiscation order given by Obama or whatever Progressive succeeds him.  They cannot fully implement communism with an armed citizenry, especially one that is continuing to arm itself at a rate of over 16.8 MILLION firearms per year, a rate which is accelerating.  That has got to be scaring their tyrannical pants off.

They need registration, as a first step.  We know what always follows: confiscation, at gunpoint.

So what do we do about it?  Well, they cain't register what ain't papered, and they cain't confiscate what they can't locate.  Very soon, it will be time for some serious non-violent civil disobedience.  Nobody dies, nobody gets hurt.  Only paper is destroyed.  (It ain't really civil disobedience, because the Constitution is on our side.)

Ol' James Wesley Rawles back in the sticks at SurvivalBlog (h/t mighty MBV at SipseyStIrregulars) lays out how it will go down (permission granted for full re-post):

This is a standing invitation to my fellow Americans: If Congress ever enacts a law mandating the registration and/or a production ban of detachable magazine semiautomatic rifles then you are hereby invited to the town square of your local community.

There, burn barrels will be set up and we will publicly burn Form 4473s, FFL Bound Books, state and local registration records, and the sales receipts for every firearm in the United States. On that same day, FFL holders and public officials holding electronic firearms records will simultaneously erase those records, permanently and irretrievably. (Using special file erasure software such as Blancco,X-Ways, and Stellar Wipe, or though the physical destruction of disk drives.)

This burn barrel day -- likely to be held the day after the President signs any new draconian legislation -- will include speeches, public prayers, and the blessing of those who have gathered by ministers, rabbis, and priests.
The core of the activities on that day will be stalwart public defiance of any new unconstitutional law(s), the open and notorious destruction of records that might be used to enslave us, and vocal public affirmations of solidarity of free men and women, in the face of tyranny. This will be a defining moment for America--a line drawn in the sand. We will forthrightly declare that we will not obey any unconstitutional law and that we will treat it dismissively, as if it had never been enacted -- nunc pro tunc. We will pledge ourselves to the defense of liberty, both individually and collectively. We will vow that if ever called to jury duty, we will nullify any unconstitutional laws, vacating the charges against the accused, in accordance with our long-standing right as jurors. (See: www.FIJA.org.)

The Law is On Our Side

We will publicly re-affirm some long standing precepts of American jurisprudence, to wit:

"The General rule is that an unconstitutional statute, though having the form and name of law is in reality no law, but is wholly void, and ineffective for any purpose; since unconstitutionality dates from the time of it's enactment and not merely from the date of the decision so branding it. An unconstitutional law, in legal contemplation, is as inoperative as if it had never been passed. Such a statute leaves the question that it purports to settle just as it would be had the statute not been enacted.
Since an unconstitutional law is void, the general principles follow that it imposes no duties, confers no rights, creates no office, bestows no power or authority on anyone, affords no protection, and justifies no acts performed under it...
A void act cannot be legally consistent with a valid one. An unconstitutional law cannot operate to supersede any existing valid law. Indeed, insofar as a statute runs counter to the fundamental law of the lend, it is superseded thereby.
No one is bound to obey an unconstitutional law and no courts are bound to enforce it." - 16 Am Jur 2d, Sec 177 late 2d, Sec 256

Recognizing the many sad lessons of civilian disarmament and subsequent genocides in the 20th Century, we will make bold and forthright statement: Never Again! We will not submit to the unlawful decrees of tyrants. We will not meekly go their jails and internment camps. We will fight for our liberty, to our dying breath.

I recommend that all adults who publicly assemble at these burn barrel events do so armed, as is our right. And those who come armed should also wear masks, to protect themselves from malicious prosecution. I plan to wear a Guy Fawkes mask, but you can wear a bandana, face muffler, or the face mask of your choice. Joining you, also wearing masks, will be many mayors, sheriffs and their deputies, chiefs of police and their officers, town council members, clergy, and people of all walks of life. We vastly outnumber the tyrants. The tyrants deserve nothing but our scorn and derision. Their fate is already sealed.

After this fateful day has come and gone, FFL holders and public officials will be able to recount: "I had no choice. My records were taken by men with guns who were wearing masks!" (So they'll have no excuse if they don't cooperate with this nationwide display of civil disobedience.)

God Bless The Republic. Down with Tyrants. We Will Prevail!

When Ol' Backwoods was a kid, that scene in Red Dawn didn't cause me to fear as much for myself as for others, because I knew my rifle and shotgun were not bought from a gun store, but handed down from my Daddny.  Still, I feared for the others whose where.

Now, I have 4473's scattered in gun stores here and yon.   So, probably, do you.  If a registration order comes down, they must be destroyed.  This will save lives.

In that day, I hope to stand and make a decent account of myself, so that I may not be ashamed in the company of my Revolutionary War ancestors in Glory.
at 11:26 AM