About that Gun Show Shooting...

Some o' y'all know that Ol' Backwoods was aimin' to go to that gun show down in Raleigh this past weekend.  Yep, I was, but didn't make it, because I was attendin' to other business, namely getting my pantry stocked back up.  But a good friend o' mine was about 50 ft away when that guy's shotgun "went off".

Y'all know guns don't just "go off"; either the guy was negligent in handling or maintaining his shotgun.

Still, the media is making a big, hairy deal about this, like gun shows ain't safe or something.  I've been going to them shows most o' my life, folks, and I have NEVER seen a negligent discharge.  Still ain't :-)

But them folks in Chicago get shot by "gang-bangers" every day.  So, let me use a little bit of that math trainin' I got in engineering school and do a comparison (hat tip to ol' SooperMexican for this): 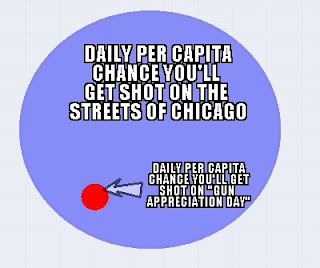 That right there represents a 177 times greater chance of being shot anywhere in Chicago than at a gun show on "Gun Appreciation Day."  That is 17,700%, people.

You ain't gonna catch ol' Backwoods disarmed on the streets of Chicago.  I ain't never gonna show my face there again.