A Conversation with An Imaginary Friend on Frankenfeinstein's Gun Ban 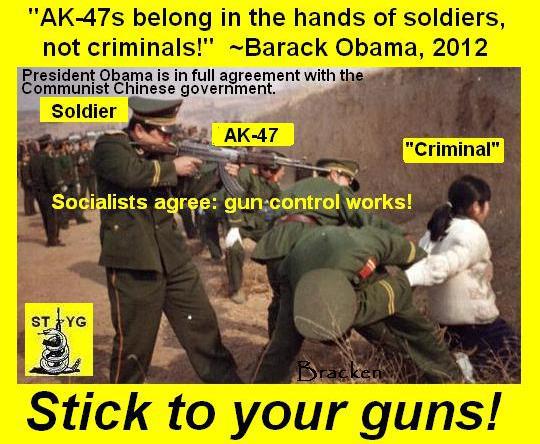 (Pic from our friend, Matt Bracken)

Senator Frankenfeinstein can introduce all the bills she wants banning me and mine.  Let her have her little power trip.  But, if that bill passes Congress, and 0bama signs it, there will be war.  I will not comply.  I will be keeping all the AR-15's and other fun stuff I have, and NOT registering them, and what's more, I will be making my own magazines and ammo.

But this is where my lily-livered imaginary friend starts in.

"Ol' Backwoods, you gonna stand up to the Federal Goverment?  They gonna shoot you down and roll you under their tank treads on the first day."


Ol' Backwoods didn't just roll off the tater truck, my friend.  Sun Tzu taught us not to attack an enemy where he is strongest, but where he is weakest.  And what's more, Ol' Backwoods ain't gonna be the first American to resist this tyranny, nor the last, nor the only.

Failing that, there are a lotta things to be done in the mass media.  Why not a bunch of Congress-ladies with their cute little kids on the Capital steps, sad-facin' the American people into lettin' them ladies carry their Glocks to protect their broods, and not to let Ol' Frankenfein ban 'em.  0bama had whiney kids on TV to make his point; why cain't we?

If'n the Fed cops feel froggy, and start confiscatin' guns by force, well, we have to move into a different mindset.  At that point, their vehicles and buildings start to be targeted.  Cain't very well roll a SWAT team if all 4 tires are flat and there's sugar in the gas tank.  Them Fed cops ain't gonna like their jobs very much if the windows in their offices keep getting crashed in from 300 yards away from golf balls launched by an AR-15.

There's a lot that a man with a rifle can do against an army.  Just ask them Jewish brothers who shot their way outta the Ghetto in Warsaw, Poland.  Hitler's army was the strongest in the world just then, but the only way they could get control of the Warsaw Ghetto was to burn them Poles out, thus defeatin' the whole point.  To me, the Polish Jews won.  By taking the enemy's guns, and usin' them against Hitler's army.

When their stuff starts breaking, a lot of Federal Cops are gonna up and quit, and that's fine, too.   Our beef really ain't with them.  Regardless of what the media says about us, we regular Americans don't like killin' people.  The Good Lord told us not to shed blood if'n we can help it, and we try to follow what He says.

But if'n them Federal Cops start bustin' in and killin' good people just because they gotta 30-round PMAG or two, MILLIONS of us will rise up in righteous anger.

"But Backwoods, they didn't rise up to defeat Obama!  And they got ObamaCare through Congress, too, and nobody has done anything about that!"


If you got to pick one skunk from a couple ol' dead skunks beside the road, what does it matter which one it is?  Romney wasn't going to protect us from this gun ban; he probably would have signed it, jus' like he signed in to law all kinda restrictions on the right to keep and bear arms in there in Yankeeland Massachusetts.

Plus, Obamacare don't specify confiscation (which registration essentially is) of the only things keeping tyranny at bay.  We're talkin' people's lives now.  That's a whole lot different than havin' to buy some medical insurance.  (Now, I don't like the abortion part of ObamaCare none at all, but that's a different cat fight.)

Remember the words of Captain Parker at Lexington Green on April 19, 1775:

"Stand your ground.  Do not fire unless fired upon.  But if they mean to have a war, let it begin here."